Flagstaff is a runner’s oasis. And it’s hailed as one, too. Ask anyone with a semi-serious hard-on for running and they’ve heard of the small mountain “city”. Wikipedia is even aware of Flagstaff’s clout–declaring that “the region’s varied terrain, high elevation, and amenable weather attract […] recreation and elite runners.” Even with its grammatical errors, Wikipedia is right. (Please don’t trust Wikipedia any less because it has the occasional grammatical error. Wikipedia has a hard job keeping us all informed about every dumb thing we might ever want to look up and it usually does pretty well.) There’s a whole team of elite runners that live here full time and an influx of professionals and Olympians throughout the year.

I get the hype. Having lived in Flag (insider knowledge coming at you: that’s how the locals refer to this oasis, although my Mom was comically certain it was ’Staff for a long time) since August, I was thrilled with the rugged options just minutes from my door. Up serious mountain paths and through old, and currently in use logging trails. The charming butterscotch smell of Ponderosa Pines (we’ll come back to these) wafting over me as I strode through patches of wildflowers. There’s a reason Instagrams of Flagstaff are always pushing quadruple digits. I could do 90% of my running on soft surfaces, which is saliva-inducing. If I wanted to test out my reflexes, there were any number of options within running distance or a 20 minute drive where I was guaranteed to trip. There were also roads and easier, smoother trails where I didn’t always trip and fall.

Then winter came. Gently and slowly at first, lulling us into a false sense of security. It snowed and stuck to the ground and everything for the first time the weekend after Thanksgiving. And that was not good. Salting the roads is supposedly bad for those beautiful Ponderosa Pines peppering the landscape. But, not salting the roads is bad for humans who might need to get places anytime in the near-ish future. We live on what I’ll go ahead and claim is the steepest residential hill in Flag, and plows are not a match for the very obtuse incline. That storm was my first inkling that winter might make running around Flag more difficult.

It was quiet the rest of December. Too quiet. The roads melted and thawed. Some trails were still snowy and inaccessible because of their higher altitude, but running on the FUTS (Flagstaff Urban Trail System–very good) was do-able. Things were ok.

Until this past week, where it’s been snowing on and off for four days straight. Even plows can’t help us. My friend Maddie and I set out to do an easy run yesterday. We figured, we’ll drive to the Dome, the inside track where NAU practices. It’s not ideal to do 50 laps just to get a few miles in, but we’ll manage. Well. The running gods frowned then spat on us. We tried every single door, and there were at least 30. We walked all the way around the perimeter and slipped on ice a few times for good measure. The NAU Dome was closed.

We weren’t completely phased. We hiked back through the snow to the parking lot and drove to the NAU gym, which I have access to thanks to grad school, but Maddie doesn’t. I’ll be honest, we didn’t think paying the community guest fee was worth it just to run 5ish (that were looking more like 4ish with each second) measly miles, so we first tried to sneak in. We went through some back doors, through athletic department offices. It wasn’t a high point, neither of us are proud. But good on you NAU, your security is top-notch. We paid the fee and got up to run on the 160m rounded rectangle track around the gym. After a couple of miles, our ankles, knees, hips were starting to feel weird. Plus it’s been drilled into me that running only one way on an indoor track is bad for you. We switched directions.

Big mistake. There is a set direction mandated for track traffic depending on the day of the week. We were running against the flow of Sunday’s direction. And within two laps, an elderly gentleman stopped to let us know that. “Wrong way!” he’d shout at us each lap, over his headphones to the walkman (kid you not) clipped to his short’s waistband. “Going the wrong way!” he never failed to let us know, staring with confusion at us until we were out of sight. We got in a total of 35 minutes, and paid $1 for each 3.5 minutes.

So as much as I love having a tight-knit community of runners immediately around me, with a small town feel, my fingers are itching to edit Wikipedia’s page. It might be time to throw a disclaimer on the runner’s oasis claim, especially the “amenable weather” mention. Sure, call me a wimp, tell me I’m whining like a baby, and bully me about treadmills or however else you see fit. But I for one think people should know it’s not always all wildflowers and Ponderosa Pines here in Flag/’Staff. 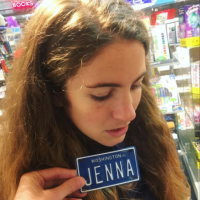 Debajo Dos: One boy's quest to run fast as heck