From NYRR – The men’s and women’s professional athlete fields featured 29 athletes who had competed in this summer’s IAAF World Championships in London, all of whom looked for one last fast performance to end their 2017 season.

In the men’s race, a steady pack held together through the quarter-mile mark, cracking slightly as Drew Windle and Craig Engels dashed ahead to take the $1,000 prime for leading at the halfway point.

As the pack’s pace wound up in the second half, Nick Willis of New Zealand used his experience with the course to power away in the final quarter-mile. The Kiwi became a four-time 5th Avenue Mile winner in 3:51.3, tying Isaac Viciosa of Spain for the most victories by a male athlete in event history. Finishing second was Chris O’Hare of Great Britain in 3:52.0, with American Ben Blankenship third in 3:52.3.

In the grand finale, the women’s pro race featured Jenny Simpson of the United States looking to break her own record with a sixth win on 5th Avenue, and she delivered on her pre-race goals. Keeping toward the front of the pack for all 20 blocks, she held off persistent challenges from Jessica Judd and Laura Weightman of Great Britain to break the tape in 4:16.6, equaling the event record time set by PattiSue Plumer in 1990. Weightman would finish second in 4:17.6, as Judd rounded out the top three in 4:18.3. 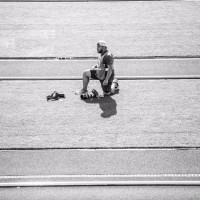 Former collegiate runner and 1x marathoner. I take photos of people who run faster than me. Fun fact I used to work for the Maury show... All the stories are real.