Shelby Houlihan dominated the USATF Outdoor Championships this year like no other athlete. Winning one distance event at a national championship is hard enough, but she also became the second person to achieve the 1,500 and 5,000m double. How did she do it? With 100 meters to go it was as if she turned on the turbo jets. Nobody could touch her in those last meters, as she appeared to have a gear that nobody else in the field had. Where did this gear come from? It all has to do with her twitter username, and it’s an approach that high school distance coaches across the nation should be using with all of their athletes to develop strong and powerful runners who are ready to handle large miles in the collegiate and, maybe even the professional system.

You see, Shelby Houlihan did not start as a 5,000 meter runner. In fact, in high school, she focused on much shorter events like the 400 and the 800. If you want a better explanation of her development as an athlete I would highly recommend hearing directly from her on the CIITUS MAG Podcast here. By starting her running career focusing on great sprinting mechanics, instead of getting to 80 or 90 miles a week, Shelby developed the speed at a young age that would come back to win the 2018 USATF 1,500 and 5,000m races. Eventually, once these mechanics were outstanding, the addition of an increased mileage and longer workouts under Jerry Schumacher’s training at the Bowerman Track Club enabled her to not only have an incredible final kick, but to use that impeccable form she developed in high school running shorter races and was able to develop it for longer distances. When you watch Shelby run, her foot strike for the first 12 laps of the 5k gives it away that she’s going to take the gold. No, I don’t care about where her foot is striking, I care about the way it comes above returning so much power from the ground. A foot strike that comes down from above, rebounding like a spring, is seen not just in Shelby, but many of the top distance runners around the world.

“A good description of technique in a sporting movement is therefore not one that prescribes ideal joint angles, but one that describes universally valid underlying principles of the movement and leaves room for variants that develop from self-organization and are related to the individual properties.”

If we were to watch a brand new runner and tell them they need to worry about forefoot striking with a 90 degree angle in their such and such, and DON’T FORGET the 37.56 degree angle from your whatever to your who knows what to make sure your stride is perfect, three things would probably happen.

Instead, I’m going to go out on a limb here, focusing on racing shorter distances earlier in an athletes development, Mach, and Bosch Drills (Just Google around there’s tons of stuff online), and I’ll steal Frans Bosch’s term in saying “Whipping from the Hip” is much more straightforward and simpler to practice with an athlete than an angle. It also allows an athlete to add their own variants to the general concepts of foot strike. How your stride reacts is never about what happens when your foot hits the ground, it’s all about how your foot comes down, which has a lot more to do with your hips than those special Newton shoes you just bought to make you forefoot strike. I guarantee just Googling Gerard Mach and Frans Bosch will send you down a rabbit hole which will question everything you know about developing elite running mechanics. One other thing to note about the above performance is that Galen Rupp’s coach, Alberto Salazar, has been known to be obsessive over the strength and conditioning and speed development of his runners. It’s just my opinion, but when looking at many different elite distance runners, the runners who focus a significant amount of time on getting strong and fast, seem to minimize many of the effects of large mileage which can make you have a shuffling stride and just make you feel like a tomato bursting instead of a super ball (All credit for that analogy goes to Jim Radcliffe at the University of Oregon). Why is this? Well, I believe that speed and strength help enable you to learn how to Whip From the Hip. To Sprint fast, your body needs to do this. By learning that instinctually early on in running, an athlete can prosper later by adding the endurance to race longer events with their mechanics they have been focusing on for years. Miles can come, and definitely do come, in the case of Galen Rupp and Shelby Houlihan. But the effort of emphasizing strength and speed development with and sometimes before the addition of mileage. Patrick Tiernan, 2016 NCAA Cross Country Champion was an underdog going into the national meet. His competitor, Edward Cheserek, had remained mainly undefeated throughout his collegiate career, and, having it be his senior year, coming in second was not on the agenda for “The King.” However, as the race progressed, Tiernan looked great. In fact, I might add, watch his foot strike even on a cross country course. Down from above, instead of focusing on what’s going on once the foot has landed? Bouncy? Fluid? Strong? You know it. And guess what? Patrick Tiernan is the 2016 NCAA Cross Country Champion. The two things that seemed to have a lot to do with his victory: his work with the sprint coaches at Villanova, and his incredibly energetic but graceful stride. I believe that the key to Patrick Tiernan’s success was his focus on speed development, not on any extra miles he ran that year. Is it only a hunch? Yes. But by God, did his stride and victory look awfully familiar to Shelby’s and Galen’s.

So what about me? No, I’m not an NCAA champion or a professional runner. But what am I an expert in? Mileage Overload. In high school, I was at a program in Chicago with blistering winters and no indoor or outdoor track. Every foot strike counted. So what was our focus almost the entirety of my time at North Shore Country Day School? Well, we had an unbelievably progressive strength and conditioning program and proper warmups using mini bands, drill work, hurdle drills, jump rope running, and lunge series. We also focused on developing speed early, and not just jumping into the big miles. Endurance came as more volume was added, and I certainly had my fair share of 70 mile weeks my senior year. But, I went from a 2:27 800 to a 4:30 mile from the end of my freshmen year to the end of my senior year. What do I know to be the reason for my progression: I was running the 200 and 400 like crazy my freshmen year and ran the fastest 100 meter dash around in middle school. And one of the most important things was that because of the strength I had developed, I never had a major injury throughout all of high school. This isn’t a post for me to brag about my PRs, though. It’s to show what happens without keeping up this development. The summer and fall after my graduation, I wanted to push my mileage boundaries, and I got away from almost all of the things that had helped me through high school. Putting mileage in front of strength and speed and forgetting it at times to get some very big weeks of running in had its tole. Luckily, from the work I had previously done, I never was injured. However, my form began to deteriorate into a shuffle and after some successful early season races, I floundered because I had thrown the keys to my progression away for the sake of experimenting with something new. Do I regret doing this? Of course. Would I change it? Never. Those months and months of struggling did not just make me realize why small things like the mini band warm up was so important. Over years of development those 20–30 extra minutes a day added up more than I could have ever imagined. Would my story have been different if I had run the mileage I had but kept up all the extra work I had done in High School? I will never know. However, as I have made sure to emphasize these items in my daily routine once again, I’m feeling my pop return, and I’m looking forward to seeing where my running will take me over the years to come.

But again, this is not just a place to tell my sob story about how I ran too many miles. It’s an encouragement to every distance running coach in the world to think about how to develop better progressions for their young and upcoming athletes. Sure they may be able to run a pretty fast 3200 this year because of some relatively big miles you might have them run this year, but what do you think they could run for the 3200 in 4 years if they worked up the strength and speed to handle a higher volume of work, with the foundation to run with grace. Maybe they’ll be the next Shelby Houlihan because you rethought how their development might be impacted with an early importance on developing strength and speed.

To summarize, I love a lesson I, again, learned from Vern Gambetta, which has stayed with me as I continue thinking about developing distance runners:

Get Strong, Get Fast, Get Fit.

Each of these steps is equally important, but the key is to remember that this isn’t just a list to do in order. All three of these steps must be kept up at all times with different focuses during different times in a season and an athlete’s development. 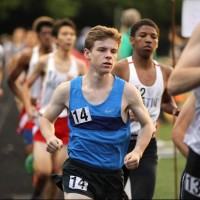