Almost all of my friends ran track in high school. This means one of two things. Either high school track is very popular, or I am not.

Let’s assume the former. Now we have another puzzle. Why would so many otherwise well-adjusted young people voluntarily subject themselves to a sport that is, scientifically speaking, less fun than a pre-calc class where the method of instruction is hot yoga?

The answer, of course, is that teenagers are cosmopolitan, forward-looking decision makers, who realize that adopting the habit of daily aerobic exercise in a social setting will add years of health and prosperity to their lives and to that of their communities.

No, I’m sorry. That is what they wrote in their college admissions essays. We should take it with a grain of salt, where here “grain” is defined as “they’re obviously lying.”

The real answer, since, as we mentioned, we are dealing with teenagers, is hormones.

Though adolescent endocrinology is, from a biochemical standpoint, completely beyond human comprehension, hormones can be described as signals the pubescent brain/penis sends to the pubescent penis/brain that basically tell them to do everything possible to stay away from home because, statistically, there are fewer mating opportunities at the dinner table.

Included among these “not home” places is the high school track.

As far as mating rituals go, hammering out countless (i.e., more than one), puke-inducing (i.e., metaphor) laps around a quarter mile oval (i.e., in my case, a 375-meter triangle) in the hopes of impressing a prospective partner might sound needlessly strenuous (i.e., I’ll save you the trouble, it’s Latin for “that is.”). But it is not needless, because (1) short shorts, (2) potential shirtlessness, and (3) I can’t dance.

There is just one flaw to this strategy. Doing track augments your social stature much in the way it augments your biceps, which begs obvious questions about the shirtless-ness.

Depending upon the trackie/non-trackie ratio at your high school, there are three possibilities, popularity-wise:

Also, they still care about dancing.

Speaking of coordinated movements, that is another reason why you joined the track team. You wanted to get in better shape for other sports.

The track team, like Jimmy Kimmel, is no one’s first choice. It’s the Subway sandwich of high school extracurriculars: it wasn’t the anniversary dinner you were dreaming of, but hey, at least you probably won’t get diabetes.

In my case, that dreamy romantic dinner was basketball. Based on the sensible premise that running a lot would make me a better athlete, I decided joining the track team would be an excellent way to prepare for basketball tryouts.

Second—and this is something they don’t tell you—distance running does not get you in shape for anything except distance running. The better you get at moving in a straight line for a prolonged period of time, the worse you get at everything else, a category that contains sports involving hand-eye coordination, balls or the possibility of earning a living. Let me illustrate with a simple graph: Needless to say, you do not make the other team in question. But it’s ok because—good news!—no one gets cut from the track team.

Yes, it’s true! For the always-available low price of having to exercise to the point of exhaustion 365-days-a-year, you get to be the member of an actual team.

Indeed, many trackies dispense with the step of proving they don’t belong on any field/court/party invitation, and instead sign-up for the guaranteed roster spot straight away. Some of these people have no prior sporting experience; the rest just seem like they don’t.

But it’s still okay! No matter your size, shape, or lack of discernable athletic talent, the track team has a place for you. The skinny guys become distance runners, the big guys go into shot put, and the lazy guys are called “sprinters.”

The idea that everyone is welcome—that everyone gets to play—takes some getting used to for those accustomed to the cutthroat charm of youth sports. Unless you did track in grade school—and, except for that one kid who’s been setting age-group 5k records since he was four, you did not—sports are the hour you spend sitting on the bench while your parents yell at the coaches/referees, or, if you are any good, the coaches/parents spend yelling at you.

Now, as a newly-minted trackie, everything has changed, not the least of which is the meaning of the word “play,” which, as far as you can tell, roughly translates to “push yourself to the absolute limit of your pain tolerance, oh wait that was only the warm-up.”

But you are on a team! You have a uniform, you have friends, and, most importantly, you have a topic for your college admissions essay.

Because let’s face it. If we’re being honest—which, honestly, we are not—the most important non-hormone driver of high school decision-making is academic aspirations.

Of course not. It’s peer pressure. Like boy bands, high schoolers only do things in groups, including, but not limited to, listening to boy bands.

Though, in fairness, this does have the added academic benefit of giving you an excellent excuse to procrastinate on your homework.

What’s more, you soon realize, track gives you an excellent excuse to procrastinate on just about anything, because, after all, you are just so exhausted from track practice—and you’ve discovered that the mostly-sedentary authority figures around you are dutifully impressed by your newfound work ethic, as well as your ability to speak in italics.

Come to think of it, what you’re doing is impressive. As an eighth-grader, who’d have believed you’d be the type of person who’d go on to gently jog a few laps around the track before heading to Wendy’s? But here you are, pushing your limits day after day, to the point where you can justify wearing that rad “Our Sport Is Your Punishment” t-shirt at least a few times a week.

So, to recap, you joined the track team as a result of (a) hormones, (b) sucking at basketball, or (c) a deep, all-consuming yearning for acceptance and/or moral superiority.

Obviously, this is not an exhaustive list. We could go on, but we will not because, frankly, we are not being paid by the word.

But before we go, we may as well mention are two other possibilities, both involving coaches.

One is that the coach from another team requires you to run track to “get in shape,” in which case he did not follow our earlier discussion, and, moreover neglects to realize that baseball is a sport played by Bartolo Colon.

The other possibility is that, one day, your soccer coach, in suitably mythical fashion, happens to notice your magnificent, flowing stride as you effortlessly dash around the field. He selflessly mentions it to the track coach, who, in another convenient twist of fate, happens to have been a three-time winner of the New York City Marathon. He recruits you to run, promising victories, college scholarships, and maybe, just maybe, if you are really lucky, a chance one day wear customized aerodynamic tape in public.

In this case, you are in luck, for you are Galen Rupp. 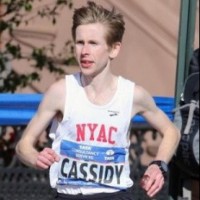