Over the weekend, the running community was hit with the news that Boulder Track Club distance runner Jon Grey took his own life after battling with depression.

“Today will be the hardest day of my life. There is an amazing person who I love, my best friend, my inspiration. My running partner. My partner in crime. I was made whole by this person as we did everything together. I will be half the person I was when I woke up this morning. I will not know how to function without being able to call you, to talk to you. You elevated everyone around you to care more, run faster and live life to the fullest. You were strong and passionate. I hope that where ever you end up, it is filled with endless trails and good friends. This is not goodbye as I will see you again running, playing video games and smiling wherever I go. My brother Jon Grey ended his life today and lost his battle with his depression.”

Tuesday would have marked Grey’s 30th birthday. Grey is best known for his success in cross country. He was a three-time All-American for William and Mary and also won the 2011 USATF Club national cross country championship. He competed at the 2016 U.S. Olympic Marathon Trials and then lowered his personal best to 2:20:08 at the 2017 CIM Marathon in December.

Grey’s coach, Lee Troop, remembered Jon with a series of tweets on Sunday.

“It’s been less than 10hrs since I spoke with Jon’s mom & then called those closest to him. I still can’t make sense of this tragic ending but I do know how much people loved him. At 29, there was so much living to have & still so much running to be done.”

“Running was Jon’s life & it was his savior & coaching him was a thrill. He was a hard worker, always went for goals despite how unrealistic, & was one of the most honest persons I’ve ever met. If he ran like shit, he accepted full responsibility and never looked for excuses.”

“Our next goal was LA Marathon which was to atone for CIM & he was fired up for it. Watching Jon race was amazing as I always knew he would give 100% & even if he didn’t win, his competitors would have to bleed to beat him! He was a true racing warrior!”

I covered Jon Grey at CIM last year. A lot about him stood out. His late race move, though ultimately unsuccessful, was striking. But what stood out most was his upbeat nature despite having a bad race. As the Citius crew was wrapping up our work in the elite athlete suite, I remember Grey and Parker Stinson sitting around and joking about their struggles over the final miles of the race. Grey came off as a guy who took his profession seriously but didn’t let a bad race get to him.

He will be missed. 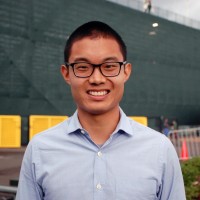