The case for Noah Lyles to be the male athlete of the year pretty much speaks for itself. The 21 year old phenom set the track on fire this past season before, during and after every single one of his races. According to IAAF’s website, Noah raced 11 times and only lost three times (excluding heats/relays) and those loses only came in 100-meter races which aren’t his A-event. If anyone plans on beating Noah next year it better be in the 100 meters, because he sure as hell can’t be beat over 200m. He was also the world leader in the event with his stellar 19.65 at the Monaco Diamond League.

I mean come on, the kid came out with with the Willy Wonka flip, proceeded to dust the field and set a world leading time of 19.65 , then somehow had energy to land a clean back flip. That’s baller. I would say Noah Lyles is the future of track and field but he is already here and already toasting everyone in his path. 2018 on the track was the year of Noah Lyles. His strength and ability to close hard was truly a work of art. His final 50 meters of each 2018 race should just play at the Smithsonian on repeat. This clip can also be played on repeat.

When was the last time Noah Lyles lost a 200m you ask? July 9th, 2016 which was in the 200 meter final at the U.S. Olympic Trials where he finished fourth as a teenage. An even crazier stat is that since 2014, he has only lost three races over 200m. Which includes all heats and finals.

But enough about his domination over the past five years. This is about his domination in 2018 and why Noah Lyles should be the 2018  CITIUS MAG Male Athlete of the Year. Noah was clearly the most dominant male athlete on the track in his event and in the celebration category. Without the undefeated season, WL, and Diamond League trophy, we wouldn’t have been able to witness some of the greatest celebrations in recent years. 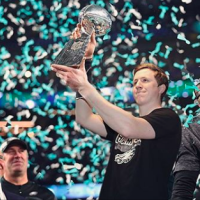 Former Division 2 oval runner. Man behind the memes for Citius Mag. Once beat Nick Symmonds on an easy run. Faster than Ryan Sterner over 400m.