Like any other day in the life of me, I went to check to see if I had any mail this afternoon, and sure enough, I did. But it wasn’t the kind of mail I like to see; it was a bill! An electricity bill, no less (the worst kind in my unprofessional opinion)! Why can’t I just go back to the days where the only mail I got was the LEGO Club Magazine and the occasional gift card from my grandma? I digress. I thought it best to just pay the darn thing and get it done with. I begrudgingly scribbled out a check, slipped it in the return envelope, tossed the bill back into the mailbox, and went about my business.

As a runner, however, that business includes bounding over trails and asphalt, tracks and treadmills, and occasionally a hill or two. Today involved that last bit (hills!), and while my lactic-filled body struggled to reach the top of the first of many sloped-demons, I wondered why these hills were not paying for my electricity or the rest of my utilities. I mean after all, I’ve been told throughout my running career that hills pay the bills, and I have YET to see them actually do so.

Okay, so we can’t actually transfer the energy needed to run up a hill into anything but our own bodies, but what if there was a way to at least see how much energy that would take, and whether or not that energy was enough to pay your electricity bill? Well, there is a way, because science!

The University of Central Arkansas recently published how much energy humans generate while climbing stairs, so we can safely assume that this could be applied to running up hills, so long as we change up some specifics.

First, we need to find the power (in Watts) that it would take for someone my size (represented as m and in kg) to go up a hill (vertical height, h). If we plug in my mass, the acceleration due to gravity (g), and a decent hill size of 50m into the equation below…

This gives our work (W) a value of 31,146.75 Joules. It’s safe to say that, depending on the angle of the hill (we’ll assume ~45 degrees, as the stairs used by Central Arkansas too used this angle), the 50 meters could take roughly 15 seconds to run, so to find our overall power generated, we’ll divide our Work by Time to get Power in this setup:

We then can convert our power to the American standard used today to measure electricity in homes (kWh).

Because our answer was generated in 10 seconds, we then can multiply this answer first by 6 to get our kW/min (12.6), and then again by 60 to get our answer of 756 kWh. To put this in perspective, the average American uses about 901 kWh in a month, so the takeaways here are that hills could, indeed, pay the bills, but you’d have to do more than an hour’s worth of cumulative hill work, or more specifically, 429 50 meter hills on an incline of 45 degrees. I don’t even need to do any math to tell you that your electricity bill won’t matter if you try running up that many hills in one sitting (tl;dr you’d be dead). We also, again, can’t do the whole transferring of our own energy into something else, probably because we’re pretty freakin’ magical and turn our food into literal energy.

But anyways, cool idea, right? Congrats on reading this far. 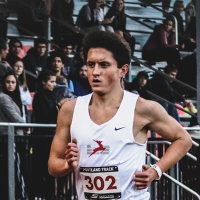