A Brief Timeline of All the Bullshit Female Runners Have Overcome

It’s March – so you know what that means. No, not that bracket thing that I never win. I’m talking about–drumroll please–National Women’s History Month and International Women’s Day!

The truth is, female runners have put up with a lot of bullshit over the years. And they’ve still come through with badass moments aplenty! So in celebration of these no-nonsense, just-give-me-the-damn-singlet-I-want-to-race women, we’ve put together a brief timeline of women’s running history.

(Spoiler alert: Pretty much anything before 1980 will raise your blood pressure.)

The modern Olympics are founded. Women aren’t allowed to compete. On the bright side, they are allowed to cheer! SCORE! (Though, come to think of it, yelling might be prohibitively difficult when you’re rocking an S-bend corset and a tight lace collar.)

Women are featured in the Olympics! Sadly, no running allowed… but women can compete in sailing, golf, tennis, and – wait for it – croquet.

All the aforementioned female events are removed from the Olympics. Women can now only compete in archery. Don’t ask.

For the first time ever, women are allowed to compete in Olympic running events! However – in a cruel twist of fate – after watching female 800m runners collapse at the finish line, the IoC bans the women’s 800m on the grounds that the event is much, much too arduous for the delicate, dainty female physique.

The Amateur Athletic Union (AAU) officially bans women from competing in all U.S. road races. “The fuq?” says 19-year-old runner Julia Chase. In a classic case of female runners not putting up with bureaucratic bullshit – indeed, the hallmark of the female running movement – Chase runs a 6.5 mile road race in Chicopee, Massachusetts.

According to reports, she did cartwheels at the finish.

Kathrine Switzer enters the Boston Marathon under the gender-neutral name “K.V. Switzer.” (Reminds me of how Joanne Kathleen Rowling was told by her publisher to go by “J.K.” because “boys might not have wanted to read a book if they knew it was written by a woman.” Do better, society.)

About four miles in, the race director noticed Switzer was a woman and lunged at her – as captured in the now-iconic photo: 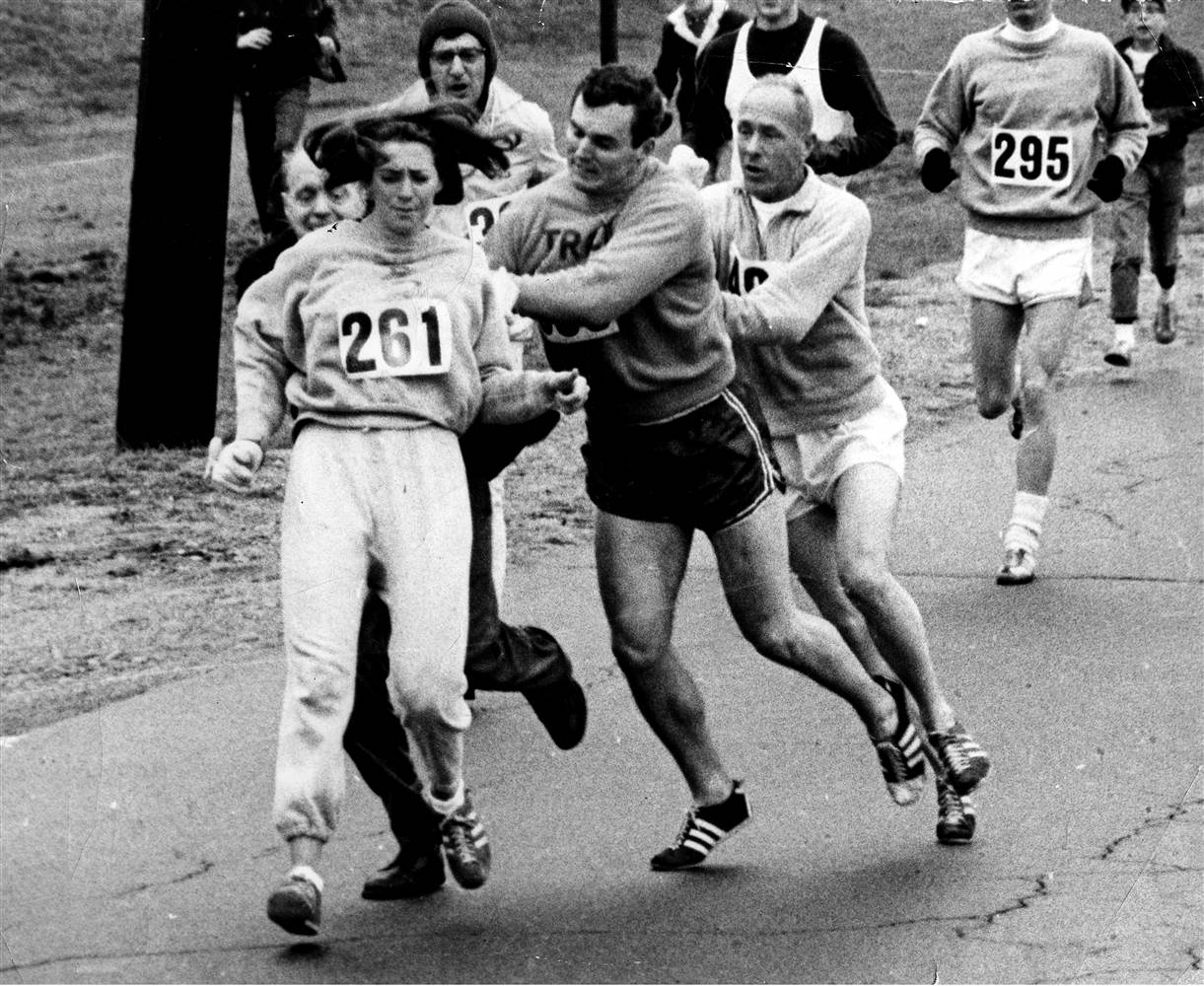 Undaunted, Switzer finished the marathon, and after crossing the finish line, casually mentioned that she “felt so great…I felt like I could have run all the way back to Hopkinton.”

In the most groundbreaking sewing project since Betsy Ross’s flag,  Lisa Lindahl, Polly Smith, and Hinda Schreiber stitch two jockstraps together to create the “jogbra,” the forerunner of the modern-day sports bra.

The American College of Sports Medicine officially finds zero evidence that women should not run marathons – leading to the introduction of the women’s Olympic Marathon four years later. “Turns out that the female physique is not as delicate and dainty as we thought!”

The first-ever Women’s NCAA Track & Field Championships are held in Provo, Utah. (You know, only 60 years after the men’s started.)

The women’s marathon is finally added to the Olympics. American Joan Benoit Samuelson shows ‘em how it’s done and drops everyone at the 4-mile mark (yes, the 4-MILE MARK) to win the gold.

Today, women are finally allowed to compete in the same distance events as men on the national and international stage. Well…except NCAA Cross Country, in which the men run 8Ks and 10Ks while the women are still relegated to the 6K. (However, being a 1500m runner myself, I’m secretly glad I got out of there before I was forced to run a 10k. Shhhhh.)

So, let’s give a big hats off to all the pioneering women who broke the rules and defied the running patriarchy. Without them, we females would still be watching from the sidelines and chafing away in our Victorian corsets on long runs. From the bottom of my running-crazed, normal-bra-phobic, feminist heart, THANK YOU.